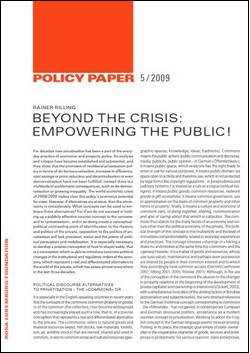 For decades now privatisation has been a part of the everyday practice of economic and property policy. Its analysis and critique have become established and substantial, and they show that the promises of neoliberal privatisation policy in terms of de-bureaucratisation, increase in efficiency, cost savings or price reduction and decentralisation or even democratisation have not been fulfilled; instead there is a multitude of problematic consequences, such as de-democratisation or growing inequality. The world economic crisis of 2008/2009 makes clear this policy’s enormous potential for crisis. However, if alternatives are at issue, then the uncertainty is considerable.What concepts can be used to embrace these alternatives? For if we do not succeed in holding up a publicly effective counter-concept to the «private» and to «privatisation», and in so doing create a conceptual political contrasting point of identification to the rhetoric and politics of the private, opposition to the politics of privatisation will lack precision, vision and the power of political persuasion and mobilisation. It is especially necessary to develop a precise conception of howto shape reality, that is a conception which is able to introduce concrete political changes in the institutional and regulatory orders of the economy, which represent a real and differentiated alternative to the world of the private,which has arisen almost everywhere in the last three decades. Read more