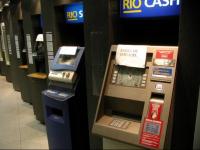 Financial Meltdown. The US- government has agreed to a 700 bn bail-out to rescue the financial market. The largest bail-out of all times. This is all highly dramatic. However, despite all the drastic measures, there are contradictory messages: The banking system as a whole is not under threat. The private savings are supposedly safe. The consequences of the huge bankruptcies in the US for Europe/ Germany/ the global financial system are unpredictable. Additionally, there are these experts who voice their concern in a refreshingly open fashion: we do not really know what is going on (first hints are collected at the RLS City Crash Counter), what is connected to what (for more hints on that see “Capitalism Hits the Fan”) and what is going to happen next.

What are 700 bn anyway? About a year of the US trade deficit. Or considerably less than 10 per cent of the entire US public debt of much more than 10 trillion. And what are 300 million that the German KfW threw out of the window? It makes me think of the famous ‘peanuts’ compared to the about 2,5 trillion that Germans currently have stacked away privately. The average amount of assets is about 50.000 euros. And in Germany, this wealth is still distributed more equally than in most other areas of the world – although it feels like an incredibly unequal distribution. The debts of some are always the funds of the others, and the losses of some are always the profits of the others. So where are the winners of this crisis hanging out? And who is going to explain to me why the metaphor of the big black hole of finance is supposed to signify more this time than an obscuring of the effects of redistribution and power due to this crisis?

Systemic crisis – what on earth does that mean? Do the small but significant differences between private, public or co-operative financial institutions make any difference? Who is in a crisis? The banks, the banking system, the financial system, the deregulation of the financial system, the predominantly private structure of the banking system? For sure, the crisis-induced demand for more privatisation of municipal savings banks, regional state banks, etc. sounds like a helpless, clueless, and hopeless rescue plan of ‘more of the same’. More of the same that most likely led to such a deep crisis. At the same time, the bail outs and rescue packages could be interpreted as a kind of disguised nationalisation of the ailing private financial institutions, and if this continues, of the whole sector.

Honestly: The banking crisis will not reach Germany until really everybody believes that there is a banking crisis, and when they go to their bank to collect their savings they are told: “No money today. Haven’t you heard? There is a banking crisis!” Argentine standards at the local savings bank branch, outraged or panicking customers attacking teller machines (see photo). Until I see this happening around the corner, I will not believe in a banking crisis. And, by the way, one thing is so obvious it is not even mentioned anywhere: no IMF and no World bank is going to impose any kind of structural adjustment or debt relief programmes against the US or ‘us’. In the current situation, the strong military apparatuses are on the side of the debtors and not the creditors – unlike the usual case. And those who have strong and aggressive armies at their disposal are not likely to lose the ‘trust’ of their creditors that fast.

So I am more inclined to believe in the good old redistribution game, okay, maybe in a somewhat more exorbitant magnitude in historical comparison: privatise the gains, socialise the losses. And I also believe in the good old power game: there is a dynamic process of concentration and rationalisation underway in the banking and financial system. And it is even being highly subsidised with all these state aid packages.